GMO In Your Food? 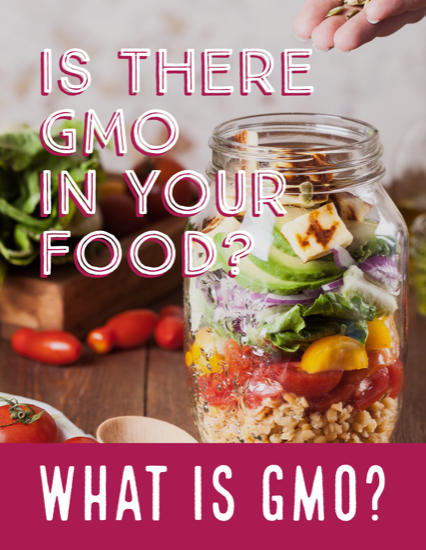 Have you seen the scientific evidence that GMO (genetically modified foods) are 100% safe with no long term health related side effects? Unfortunately, neither have we. What started out to help world hunger, has unfortunately created damage to agriculture, wild life and human health.

A GMO, otherwise known as genetically modified organism, is a plant, animal and/or microorganism whose genetic makeup has been modified in a laboratory using genetic engineering or transgenic technology. (2) This has the potential to create unstable combinations of plant, animal, bacterial and viral genes that otherwise would not occur in nature. (2)

A company called Monsanto is the world leader in genetically modified (GM) crops. According to their website, they believe that they are helping to solve world hunger and there are no adverse side effects of consuming GM products. Sadly, the truth is that studies have been conducted and have demonstrated that GM products have the potential to cause tumors, digestive dysfunction, allergic reactions, liver and kidney damage. (7)

What Are Other Harmful Effects of GMO?

Typically, when we consume plants the toxic level is considered low enough to not warrant any potentially side effects.  There is a concern that by adding an “exotic gene” into a plant could increase toxicity in us. How does this happen? An article written by Dr. Ryan Bentley, “Genetically Modified Organisms”, states that certain bacterial genes are inserted into crop seeds to allow farmers to spray otherwise deadly doses of weed-killer directly on the crop without killing it. Seeds such as bacterium Bacillus Thuringiensis (Bt) are inserted into the soil and used as an insect-killing pesticide inside of every cell of the plant. When insects consume the plant, they get a mouthful of potential toxins which in turn causes the insect’s stomach to erupt…killing the insect.  If it can harm or kill an insect, what can it do to humans?

Genetically modified plants could possibly have lower nutritional value when compared to its traditional counterpart. This may be due to nutrients that are unavailable or indigestible. (6)  One example came from a study back in 2003, which showed a strain of GM soybean produced lower levels of phytoestrogen compounds. Phytoestrogen compounds are used to protect us against heart disease and cancer.  The GM soybeans had lower levels when compared to traditional soybeans, thus not supplying the body with the nutrients it needs. (6)

How Do You Avoid Foods that Contain GMO’s? (5)

Genetically modified foods are just one of the many culprits in today’s society that is causing disease. By knowing deficiencies and toxicities that make up one’s metabolic analysis, one can evaluate their lifestyle and make better choices to optimize their health. It’s not easy knowing where to start. That is where your experienced nutritionist can help you by analyzing your comprehensive blood analysis and hair tissue mineral test. Ask us today on how you can start on your way towards better health!

Our natural health solutions are based on scientific and objective testing including blood, urine and hair. The Electronic Vitality Report provides individual, drug-free recommendations to promote optimum health based on imbalances and dysfunction identified from the test results. Take our Symptom Survey then Make an appointment and receive your Comprehensive Analysis Report. (View Sample Report here.)