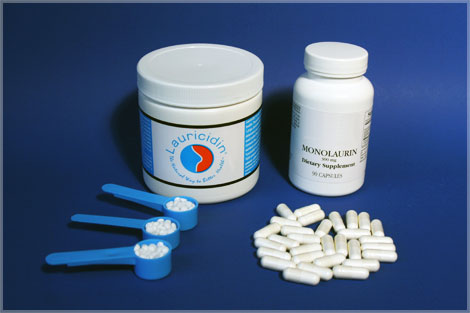 Lauricidin ® Is A Science Based Nutritional Supplement For Better Health And Self Healing.

Lauricidin ® Is A Science Based Nutritional Supplement For Better Health And Self Healing.

It is important to know what is a monoglyceride like monolaurin (Lauricidin ® ).For visualization, a monoglyceride is composed of glycerin and one fatty acid joined as in the drawing below. In this illustration, sn represents the glycerol carbon position, n the length and R the kind of fatty acid attached to glycerol.

A monoglyceride (MG) lipid of which are two kinds, will have only one fatty acid attached to the sn1(3)- or the sn2- position of glycerol. The fatty acids in the sn1 and sn3 positions are similar since they occupy a position at either end of the glycerol molecule. Therefore, not all monoglycerides are the same since the fatty acid can occupy the end position (sn1(3) of glycerol or the middle sn2 position. Their structural differences need to be emphasized. It is important therefore to remember these structural sn designations since they reflect the different biological metabolism of the two monoglycerides. Where there are two fatty acids attached to glycerin, the lipid is now known as a diglyceride (DG). If three fattyacids are attached the lipid is known as a triglyceride (TG) or simply as a fat.

The antiviral, antibacterial, and antiprotozoal properties of lauric acid and monolaurin have been recognized for nearly three decades by only a small number of researchers: their work, however, has resulted in 100 or more research papers and numerous U.S. and foreign patents. Prof. Dr. Jon J. Kabara performed the original seminal research in this area of fat research. Kabara (1968) first patented certain fatty acids (FAs) and their derivatives (e.g., monoglycerides (MGs) that can have adverse effects on various microorganisms. While nontoxic and approved as a direct food additive by the FDA, monolaurin (Lauricidin®) adversely affects bacteria, yeast, fungi, protozoa, and envelope viruses.

Kabara found that the properties that determine the anti-infective action of lipids are related to their structure: e.g., free fatty acids & monoglycerides. While the monoglycerides are active; diglycerides and triglycerides (fats) are inactive. Of the saturated fatty acids, lauric acid has greater antiviral activity than caprylic acid (C-8), capric acid (C-10), or myristic acid (C-14).

Fatty acids and monoglycerides produce their killing/inactivating effects by several mechanisms. An early postulated mechanism was the perturbing of the plasma membrane lipid bilayer. The antiviral action attributed to monolaurin is that of fluidizing the structure in the envelope of the virus, causing the disintegration of the microbial membrane. More recent studies, indicate that one antimicrobial effect in bacteria is related to monolaurin’s interference with signal transduction/toxin formation (Projan et al 1994). Another antimicrobial effect in viruses is due to lauric acid’s interference with virus assembly and viral maturation (Hornung et al 1994). The third mode of action may be on the immune system itself (Witcher et al, 1993).

Hierholzer and Kabara (1982) first reported the antiviral activity of the monoglyceride of lauric acid (monolaurin) on viruses that affect humans.. They showed virucidal effects of monolaurin on enveloped RNA and DNA viruses. This work was done at the Center for Disease Control of the U.S. Public Health Service. This study was carried out using selected virus prototypes or recognized representative strains of enveloped human viruses. All these viruses have a lipid membrane. The presence of a lipid membrane on viruses makes them especially vulnerable to lauric acid and its derivative monolaurin. These initial findings from the Center of Disease Control (CDC) have been confirmed by many other investigators.

Research has shown that enveloped viruses are inactivated by added fatty acids and monoglycerides in both human and bovine milk (Isaacs et al 199 1). Others (Isaacs et al 1986, 1990, 1991, 1992; Thormar et al 1987) have confirmed Kabara’s original statements concerning the effectiveness of monolaurin.

Some of the viruses inactivated by these lipids are the measles virus, herpes simplex virus (HSV-1 and -2), herpes family members (HIV, hepatitis C, vesicular, stomatitis virus (VSV), visna virus, and cytomegalovirus (CMV). Many of the pathogenic organisms reported to be inactivated by these antimicrobial lipids are those know to be responsible for opportunistic infections in HIV -positive individuals. For example, concurrent infection with cytomegalovirus is recognized as a serious complication for HIV positive individuals (Macallan et al 1993).

Thus, it would appear imperative to investigate the practical aspects and the potential benefit of a nutritional supplement such as monolaurin (Lauricidin®) for microbial infected individuals. Until now few nutritionists in mainstream nutrition community seem to have recognized the added benefit of antimicrobial lipids in the support of infected patients. These antimicrobial fatty acids and their derivatives are essentially nontoxic to man. According to the published research, lauric acid is one of the best “inactivating” fatty acids, and its monoglyceride is even more effective than the fatty acid alone (Kabara 1978, Sands et al 1978, Fletcher et al 1985, Kabara 1985).

Decreased growth of Staphylococcus aureus and decreased production of toxic shock syndrome toxin-l was shown with monolaurin (Holland et al 1994). Monolaurin was 5000 times more inhibitory against Listeria monocytogenes than ethanol (Oh & Marshall 1993). In vitro monolaurin rapidly inactivate Helicobacter pylori. Of greater significance there appears to be very little development of resistance of the organism to the bactericidal effects (Petschow et al 1996) of these natural antimicrobials.

Chlamydia trachomatis is inactivated by monolaurin (Bergsson et al 1998). Hydrogels containing monocaprin/monolaurin are potent in vitro inactivators of sexually transmitted viruses such as HSV-2 and HIV-1 and bacteria such as Neisserian gonorrhea (Thormar 1999).

Monolaurin does not appear to have an adverse effect on desirable gut bacteria, but rather on only potentially pathogenic microorganisms. For example, Isaacs et al (1991) reported no inactivation of the common Esherichiacoli or Salmonella enteritidis by monolaurin, but major inactivation of Hemophilus influenza, Staphylococcus epidermis and Group B gram positive streptococcus.

The Problem of Antibiotics

The phenomenal rate of prescriptions dispensed for antibiotic use, and to a lesser extent, antiviral has grown exponentially in the past several decades. Antibiotic has limited specificity and generally does not recognize “good” bacteria (often referred to as probiotics or for life) from “bad” bacteria (meaning those bacteria that may cause disease.) Antibiotics try to destroy all bacteria and are usually unsuccessful.

More antibiotic therapy may start perpetuating a chronic illness. The cycle of antibiotic therapy may go on for months and months, and repetitious indiscriminate use of antibiotics destroys weak bacteria and sets up the stage for the more virulent bacteria to survive (as in survival of the fittest). The new, stronger, pathogenic bacteria are now “resistant” to the established antibiotic and another antibiotic must be found to fight the new pathogen. We are rapidly approaching that point in history of having super bacteria: disease causing bacteria that are unaffected by any antibiotic. In its failure, antibiotic therapy has taken with it the health of those same individuals it strives to help.

The pelletized microform Lauricidin ® is easier to take orally and proper concentration levels can be better achieved. One blue scoop (tsp.) is equivalent to 10 capsules. Health levels may be 1-3 scoops/day depending on prior health problems. This would translate to taking 10-30 capsule/day

† These statements have not been evaluated by the Food and Drug Administration. This product is not intended to diagnose, treat, cure, or prevent any disease.
Please follow and like us: